During a recent speech delivered at the Atlantis Aquifer, Cape Town Mayor Patricia de Lille thanked Capetonians who had been making efforts to cut their water usage, saying that about half of water users had restricted their daily usage to 87 litres per day.

But added that this was not enough. “We need each and every Capetonian and business on board as a partner on this journey,” she said.

“We are in an unprecedented drought crisis and this phase is critical because if the City and residents don’t do enough together and simultaneously, we will run out of water.”

She said the City was doing everything in its power to ensure additional supply, including finding and hiring the country’s best team of experts who were working 80-hour weeks with the metro to ensure that additional water could be brought ‘online’.

The Atlantis plant was one of several sites for alternative water sources which form part of the ‘Water Resilience Plan’.

The City of Cape Town had recently refurbished many of the boreholes around this West Coast area to increase the production of this plant. She pointed out that these boreholes formed a part of the City’s unique Artificially Recharged Aquifer System and said a lot of work had gone into ensuring an increase in the volume of water from this aquifer system.

Prior this work, the system had been producing around four million litres of water per day. “We have now increased the yield from this aquifer by an additional five million litres per day.”

The water is serving homes and industrial businesses in Atlantis, Mamre and Pella on the outskirts of the West Coast, which is quite a vast area. “So the additional capacity will be welcomed,” the Mayor said.

“This work demonstrates our commitment to addressing this current drought crisis. I repeat my commitment that I will not allow a well-run city to run out of water.”

She added that she had made it clear when the site of a new desalination plant with the V&A Waterfront had been announced: “we have a plan and we will supply water, but we need Team Cape Town to assist us”.

In the meantime, the City of Cape Town announced that Level 6 water restrictions will be implemented from 1 January 2018, which means that households using more than 10,500 litres per month could face fines and penalties. A proposal for a drought charge of between R45 and R2 800, depending on the value of the property, has also been tabled.

Take a look at these shocking images of the Theewaterskloof Dam looking more like a desert than a body of water: 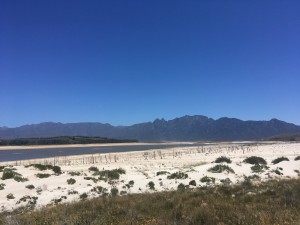 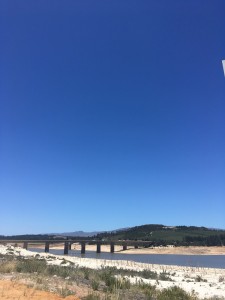 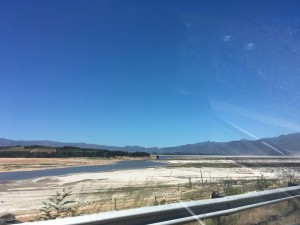 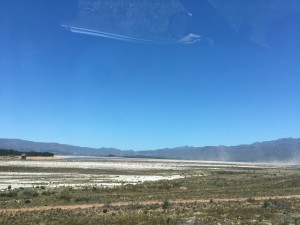 The Zip Zap Circus Academy now has a new address in Salt River.

The two founders of the academy, Brent van Rensburg and Laurence Estève, officially opened their permanent premises with its striking building on Shannon Street a few months ago. There is much reason to believe that this new kid on the block has certainly been the talk of the town and will continue to be!

The academy was moved from its former venue in Founders Garden at Artscape on the foreshore to Salt River, where it is believed that a greater capacity will be accommodated, allowing for the growing outreach and youth programmes.

Zip Zap Circus was founded in Cape Town in 1992 to inspire young people and help to build a new diverse culture of peaceful coexistence in those troubled times in South Africa.

Work is conducted in varied communities with children and the aim is to develop a need for a “dare to dream” mindset, whilst fostering children to achieve the impossible. With the new building at 6 Shannon Street, Zip Zap Circus Academy will be able to enhance the programmes for the kids by awarding them the opportunity to participate in a state of the art environment.

It is easy to foresee that before long the place will be a like a beehive, filled with young energetic people running up and down shaping themselves for the future. 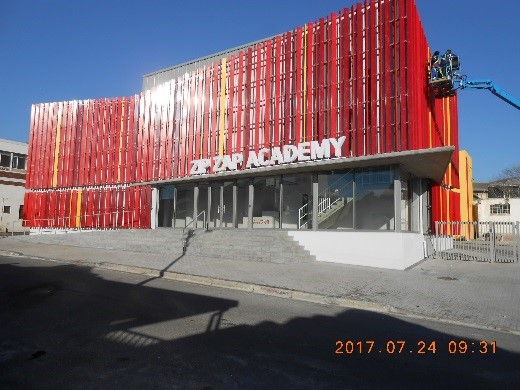 Apparently, the dome on the foreshore will continue to be used for performances, to conduct workshops, and to train professional performers. It will also available for hire for corporate functions.

Van Rensburg says ‘We have long dreamed of having a permanent home and our dream is finally becoming a reality. This is a great message for our young performers as we always tell them: ‘Dare to dream.’  Now they will see how our dream is coming true.”

The designer of the building, Y Tsai of Tsai Designs Studio, says: “The vibrantly painted academy captures circus magic in its structure. The centrally-located performance stage projects a theatrical atmosphere and the variety of rooms and spaces create the possibility for different learning experiences.”

Here’s a quick update on two of the programmes:

Many of the lamp posts and street sign posts in Salt River had been very old and had either become rusted or had simply not received a coat of paint for far too long – until a team from the GROW Job and Life Rehabilitation Programme, employed by the Salt River CID, got stuck in and started introducing the much needed cosmetic touch-up operations.

GROW (‘God Restores Our World’) is the job rehabilitation programme of MES (Mould, Empower, Serve), a country-wide organisation which in turn has the vision ‘To change the heart of the city’ and the mission ‘To empower people holistically to live independent, sustainable and meaningful lives.

According to the MES website, the GROW Job and Life Rehabilitation Programme creates shift opportunities where cash is earned for work done, whilst being part of a coaching and developmental programme. It provides the homeless and unemployed community an alternative to aggressive begging and petty crime.

Participants in the programme are enabled by earning an honest income in cash, to restore their dignity, buy their meals from the MES canteen, pay for overnight shelter accommodation, apply for ID’s and even save.

In turn, GROW teaches participants to be diligent and disciplined, as well as empowering them with the skills to seek employment. The GROW programme is primarily supported through the occupational services provided to clients such as the respective CID’s.

In terms of the MES principles and the universal application of the Social Work Action Team concept, Geocentric offers this shift employment by using work teams for the beautification of CID’s. In the case of Salt River the teams are used predominantly for graffiti removal and for the painting of lamp posts and street sign poles. Many of the poles had also been defaced by illegal posters. “So, using specialised paint and our SWAT team, we have beautified all these elements,” says Geocentric general manager Ralph van der Brock. “The result is a clean and well maintained urban environment.”

Cape Town is currently experiencing one of worst and longest droughts and this would ordinarily place a halt to all beautification that include landscaping and greening initiatives.

However, Management company Geocentric decided to continue with beautification through the use of “potted gardens” rather than traditional landscaping work.

By grouping a number of these large planters together the impression of a potted garden was created.  These pots are easy to maintain and even easier to keep watered – the contained environment makes it easy to keep the plants green with limited water resources. 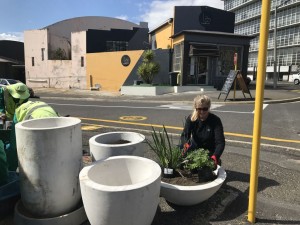 Combining this with some hardy plants a beautiful green spot can be created. 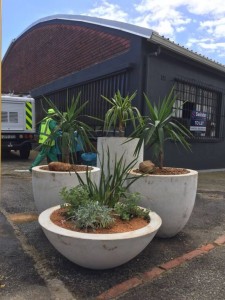 Now, using our custom built water truck, we are able to water our potted gardens with rain water harvested earlier in the year thereby sustaining our greening projects.  We have competed three such projects in SRBID already and plan to do the next project in Yew Street Park